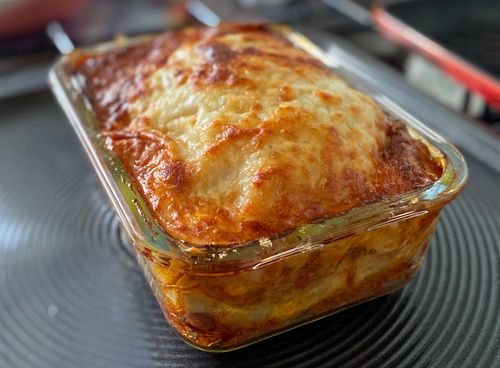 A recipe for lasagne - no longer a disaster

Having put out my blog post 'Lasagne a la Me' all those years ago, I realised I hadn't actually shared my own recipe for lasagne at all. So, I decided to do just that...

So, I realised when reading back my old “Lasagne a la Me” post that I didn’t actually share my own recipe for lasagne. I suppose, at the time, I was using the recipe that’s linked there, just tweaking a few little bits, but not enough to warrant an entirely new recipe. A few years, give or take, and I’ve refined my lasagne making skills somewhat, combining the best bits of some of my favourite recipes to create my own tried and tested version.

I’m still using a Mary Berry recipe, albeit not one that's actually for lasagne. The ‘meat sauce’ is actually a ragù bolognese recipe, but it’s very versatile and works really well for this dish. I’m not going to lie: it’s not something you want to try to accomplish for a quick evening meal, as it’s not a speedy thing to make; but, if you’ve got a number of guests coming round - or are feeling a bit like Garfield - you’ll probably want to give this one a try. For starters, this one's got wine in it...

There's something about adding wine to a dish that makes it that much more unctuous (yes, I know it's a contrived word, but there's really none better for describing the sensation) and gives food such a depth of flavour. When you use wine in cooking, it needs time to simmer away, burning off the alcohol to impart its properties to the other ingredients. This is so much like the time we need to give ourselves after a life-altering event and why I think it took me a while to get back into cooking after my Nan passed away.

She was the person I learned to cook with and watched in the kitchen; when I'd built up enough confidence, she'd let me take over, with the odd "not, like that - like this..." sprinkled in for good measure. I miss that time we spent together more than I can say - I'm so grateful for her wisdom and patience, not just in cooking, but in every area of my life. I can't wait to share her knowledge, and the tips I've picked up since, with my own children one day.

This lasagne is adapted from a couple of Mary Berry’s recipes, with a few hints of Chris Morocco’s “BA’s Best Lasagna” (US spelling of lasagne...?) - e.g. the pancetta/bacon and the dried pasta sheets. His suggestion of making the meat into meatballs, baking them in the oven and then crumbling into the red sauce sounds amazing. I’ll have to try it when I have a bit more time. The consensus over on the Bon Appetit website comments section is it takes two days - feel free to give it a go and let me know how it turns out!

I've fallen in love with Chris and everyone in the test kitchen at Bon Appetit. Every time a new video pops up on their channel, D and I have to sit down and watch. We particularly like Claire's Saffitz's "Gourmet Makes" and Chris' series of recreating other famous chef's recipes while blindfolded - the one where he recreate's Paul Hollywood's Cornish pasties is very funny (and completely true). I so want to be a freelance or remote writer for them one day (hey, I can dream, right?).

Having a few vegetarian/vegan friends (and a friend who doesn’t eat pork), this recipe might not be the one for you; however, Mary Berry does make an excellent vegetarian lasagne in this book, which I’m sure could be adapted for vegan eaters. Also, if you’re unable to eat pork, you could remove the pancetta from this recipe and swap out the pork mince for a double helping of beef - it wouldn’t taste quite the same, but it’d still be pretty damn delicious.

If you’re feeling somewhat adventurous in the kitchen one afternoon, why not try whipping this up? Full of deep, hearty flavours, this beloved pasta dish is one you won’t want to miss.

Prep time: 1hr or so

Tip: This recipe easily makes a large lasagne that will feed 6 (or 4 very hungry people), with probably a little sauce leftover. You can make a double batch, and either use it, or freeze it for later - your future self will thank you.

*Tip: I’ve used both fresh lasagne sheets and dried for this recipe, and each works fine. For an easier time, fresh is better, because you don’t have to cook it first and it’s also less flimsy; however, it’s more expensive and you end up buying two packets, then not using it all - if you're like me, you'll have a top-freezer drawer with loads of leftover sheets and not much to use them for. I tried dried lasagne sheets this time, as recommended by Chris in his recipe (above). It was more fiddly and a pain to have to cook them, but they were ready in about 5 mins - not including water boiling time - and it meant we cooked what we needed and had just enough.

Tip: The lasagne itself also freezes really well once made up, so don’t be afraid to pop leftovers in the freezer - if you have any. You could also make one up in advance, freezing before the last 45 minute baking stage. You’ll thank me later...

Give me a shout if you make this recipe and send a photo of your creation - I’d love to see. Hopefully, it might help someone who's finding things tough right now, even if it's just to cook something delicious that makes them feel a little better. Food is medicine for the soul (or one aspect, at least)! It must be why people coined phrases "comfort food" and "soul food." Have you ever made a recipe that's got you through difficult times? Let me know on Twitter...

Cooking is a type of therapy 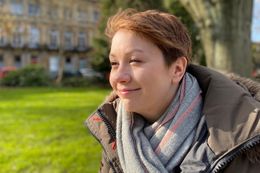